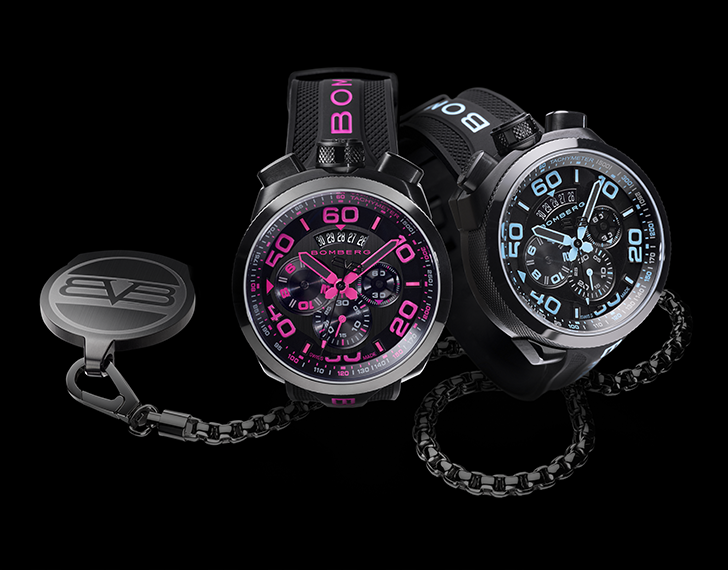 46 years after 1968, BOMBERG introduced its second product line in 2014: The BOLT-68 Collection. This collection’s name speaks to the entire brand DNA. The “68” refers to one of the most significant years of the 20th Century, and “BOLT” emphasizes the collection’s strength and designed impact.

The most unique and disruptive aspect of the BOLT-68 is its transformative ability. Using an ingenious bayonet system with a trigger guard – an exclusive system patented by BOMBERG – the time-keeping module can be detached from its base and attached to a metal chain to become a masculine pocket watch. The chain differs quite a bit from the fine chains on the pocket watches of yesteryear. As you will no doubt have realized, this tool is destined more for a pocket on a pair of jeans than that of a gentleman’s waistcoat. All pieces of The BOLT-68 Collection include the chain and medallion for turning your exclusive timepiece into a disruptive pocket watch.

Two models of the BOLT-68 are available: The Bolt-68 Chronograph quartz model and The BOLT-68 automatic model. The Bolt-68 Chronograph quartz models measure 45 mm in diameter and are powered by Ronda caliber 3540D quartz movement. The BOLT-68 automatic models measure 47 mm and are powered by Concepto caliber 99001 automatic mechanical movement. The BOLT-68 Collection is available in a variety of stainless steel and PVD treated steel cases. The top-of-the-range model, the BOLT-68 Skull, has been produced as a limited edition with a black metallic chain whose links represent a series of skull and crossbones.