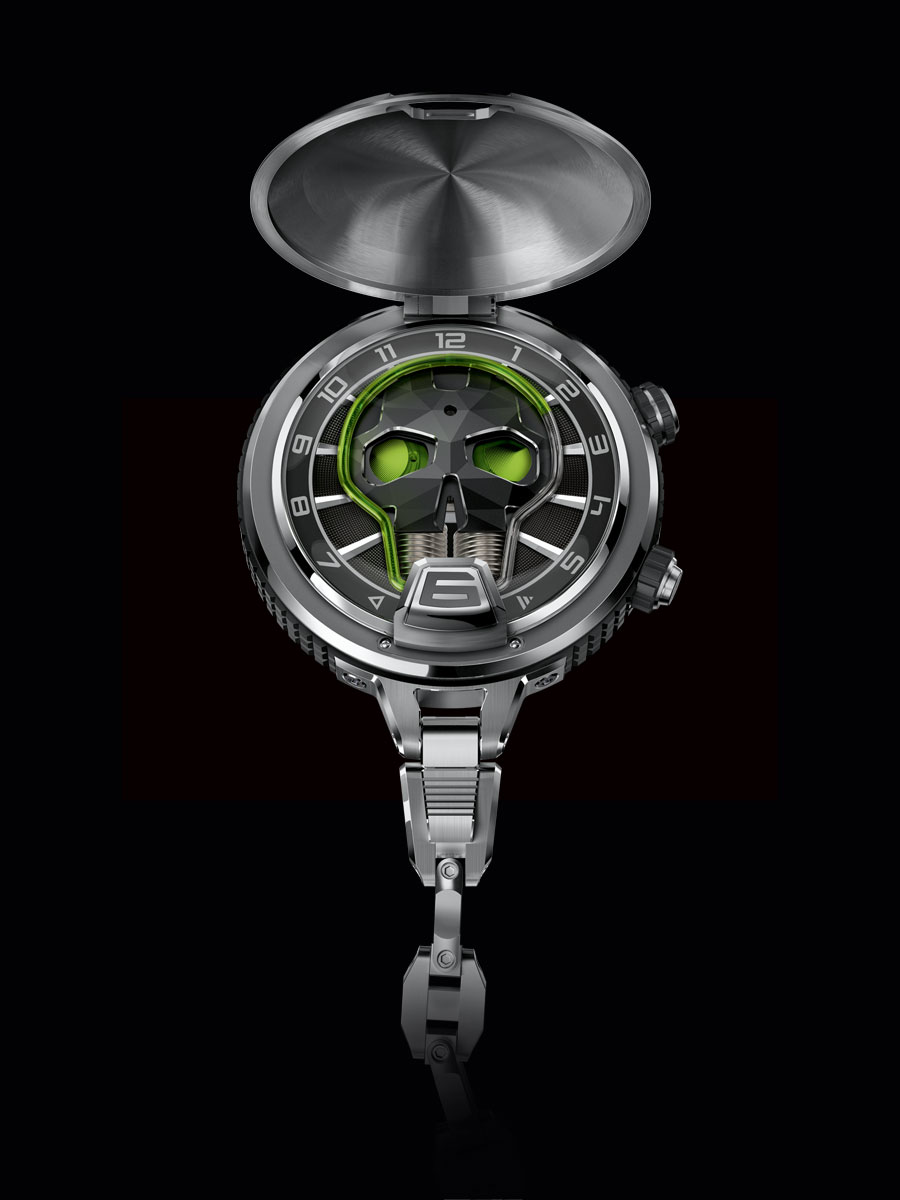 HYT has unveiled its first ever pocket watch, the Skull Pocket. A new case, the first ever Skull and mechanical light source combination, exclusive finishes, and just 8 pieces available: the Skull Pocket marks a turning point in HYT’s development.

With the Skull Pocket, HYT is restating its desire to invent the watches of tomorrow, using the knowledge of the past and the science of today. The pocket watch, one of the most noble legacies of traditional watchmaking, has become a new playground and means of expression for HYT. It exudes an “art de vivre” which is both contemporary and unconventional, embodied by this rare, interactive piece.

The fluid technology integrated in HYT’s Skull Pocket sits perfectly with all the lines of the traditional mechanical watch, bringing these into the 21st century. This ability to take fine watchmaking far beyond its conventional horizons is one of the reasons why HYT has just joined the very exclusive circle of partner brands of the Fondation de la Haute Horlogerie. 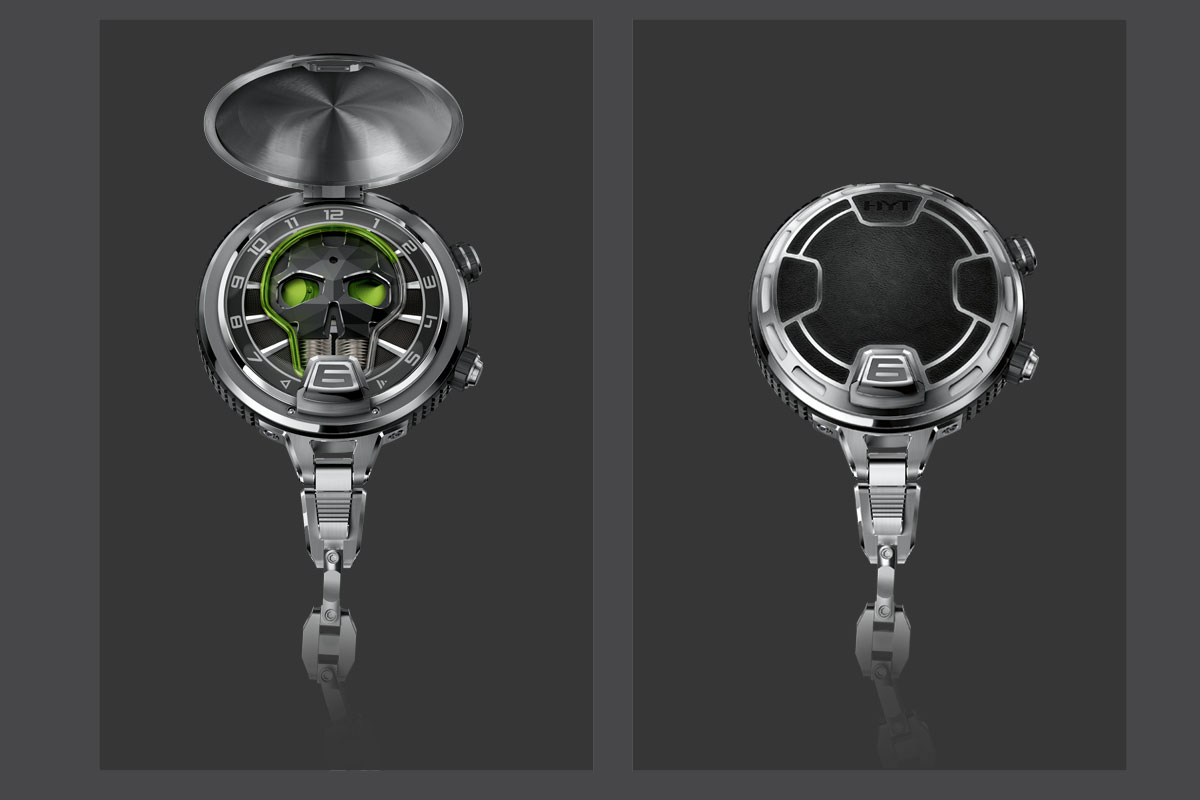 The Skull Pocket is available in a limited release of 8 pieces. It is one of HYT’s richest creations. For the first time, the light source module developed for its Metropolis model has been combined with a Skull.

This module has two LEDs positioned underneath the rider at 6 o’clock. The micro-generator which activates them has been integrated into the case. It works by converting mechanical power into electricity. A barrel spring is loaded when the dedicated push-button crown at 4:30 is turned. Pressing this push-button crown then releases the spring and turns the micro-generator at very high speeds, creating the electricity needed to activate the two LEDs. This bathes the Skull Pocket in a soft blue light, and gives the green liquid its fluorescent glow.

The light lasts for around five seconds, after which the mechanism needs to be reinitialised. No batteries or electronics are required for this function as the process is completely mechanical. Developing this patented assembly, which comprises no fewer than 82 components, was a particularly painstaking task due to its extreme miniaturisation and its curved shape.

The assembly sits within a 59 mm case which was specially created for the Skull Pocket, made from titanium and black DLC titanium. In place of the lugs, HYT has developed an exclusive cover system to protect the dial. Articulated by a hinge at 12 o’clock, it is triggered by the iconic rider at 6 o’clock, which has become one of the brand’s aesthetic hallmarks. The cover features an engraved pattern with leather inserts, and can be fully customised.

When pressed gently downwards, this rider releases the cover, unveiling the Skull Pocket dial. For the first time, the skull is completely faceted in a contemporary design, subtly reflecting the light in an echo of the Clous de Paris stud finish which surrounds it.

At night, the light emanates instantly, producing a soft blue glow which floods the case and causes the coloured liquid charged with fluorescent dye to react. The time can be read intuitively around the circumference of the skull, via indices with Arabic numerals filled with SuperLuminova. The seconds are displayed in the left eye and the power reserve in the right eye. The piece is attached to a titanium chain specially designed for the Skull Pocket. Its faceted structure, which alternates polished and satin finishes, was designed to evoke the aesthetic of the skull, in a tangible extension of its spirit.

· domed sapphire crystal with anti-reflective coating on the dial side

· water-resistant up to 50 metres

· Two immiscible liquids; one transparent and the other coloured with a highly resistant dye

· system activation and winding function with push-button crown at 4:30

· micro-generator system triggered by pressing the push-button crown at 4:30.