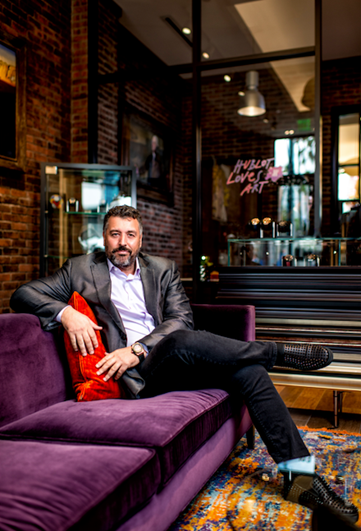 Graduate of the International Business Development program at the University of Neuchatel, Switzerland, Pieric “Rick” Joel Vaucher De La Croix has over 25 years of experience in managing international luxury brands at the entrepreneurial and corporate levels.

Mr. De La Croix believes that true luxury watches like Hublot possess precision and arresting beauty that is beating back the assault, domestic and foreign, of mediocre and imitation timepiece brands.

Rick was born on August 8th, 1967 in Pembury, England. His father is Swiss and mother is English giving him dual Swiss/British nationality.

Rick de la Croix got his start in the watch business working for Tag Heuer’s marketing department in Geneva right out of school. Mr. De La Croix later worked for The Dixie Group, which owned Zenith at the time. His time at Zodiac and Corum increased his understanding and love for all things watches.

Rick’s next step was to establish his own distribution company: DLC Trading (now the Myconian Luxury Group). In 1992, Rick de la Croix made the life-altering decision to take a sabbatical and head to South America. There the adventurous Englishman met his future wife Martha. He returned to Switzerland to work for Corum after his year on sabbatical, but he was eventually pulled by love back to Colombia to set up his own distribution company in 1997.

“I wanted to get into a market that was undeveloped, that was challenging, where luxury brands had stayed away from,” De La Croix explains, “I chose Latin America, and I went down to Colombia and set up my company there. At the same time I fell in love with and married a beautiful woman who is now the mother of my children.”

There, Pieric De La Croix set up and managed Latin American distributions for the jewelry and watch divisions of the Versace and Gucci groups. For the Hublot watch brand–known for arresting beauty and sophistication–he served as a founding distributor partner, working closely with the brand’s owner and CEO, Jean Claude Biver and Ricardo Guadalupe respectively.

It was the beginning of the vast distribution network that made Rick DeLa Croix the tremendous success he is today. His cache of brands include Hublot, HYT, Romaine Zenith and Graham, which De La Croix is partial to, due to its English origin. “Some people say that is where watch-making really started,” he says with a wink.

Today, Rick is the CEO of Ares Distributors, Inc. They have headquartered in the heart of Coconut Grove, Miami. Ares Distributors operates in the USA, Latin America, and the Caribbean through a network of dedicated sales, marketing, and customer service professionals. For ten years, the team has helped to build the presence of luxury brands through quality sales and after-sales service, groundbreaking and innovative marketing, and retailer support. Ares Distributors continues to expand, as the luxury timepieces represented by Ares have reached unprecedented levels of demand in Latin America, USA, and the Caribbean. Ares Distributors operates with luxury timepieces by Hublot, Zenith, Bomberg, Greubel Forsey, Bovet, MB&F and L’épée.

It’s not just business for Rick–he is truly passionate about watches. “As a man, that’s really it. The accessories I can use are cars and watches. There’s nothing else out there.” So he collects and wears wristwatches the way a socialite might Birkin bags, and he admits he’s more into the design than the technology. “I’m not mechanically minded, I’m more design oriented. I’m inspired by watchmakers that push the edge of creating new designs.” While Hublot tops the list, he admires many. “I like very much what Richard Mille does. And Greubel Forsey, They are trend-setting by doing something different on the aesthetic side. These are all watches that I would buy.” Ultimately, De La Croix feels that a watch needs to be a good conversation piece. “We have to talk and have conversations 24/7 don’t we?” He says with a laugh.

Charity plays a major role in Rick’s life. He is a board member of various charities such as Ray Allen’s Ray of Hope Foundation, Alonzo Mourning’s foundation, and the Miami Heat Foundation. Outside of Miami, De La Croix collaborates with the famous rapper Ludacris and his foundation to support organizations like the Boys & Girls Club of Atlanta. He also played a key role in raising over one million for charities backed by the World Boxing Council in Las Vegas.

Rick De La Croix strikes to find a balance in life between charity, the luxury watch industry, and his own family. Rick has two children, Rick Joel and Paula De La Croix.