Shanghai, China – 30th October 2017; Olympic Champion and Hublot Ambassador, Justin Rose carded a closing 67 at the WGC – HSBC Champions in Shanghai to hold off a cast of the world’s best in a dramatic final round. The World #13 looked composed and in complete control as the pressure mounted down the closing stretch. Englishman Rose, who is renowned for his precision play was in imperious form holding off his peers to a shot winning margin, which included fellow Hublot Ambassador, World #1 Dustin Johnson. 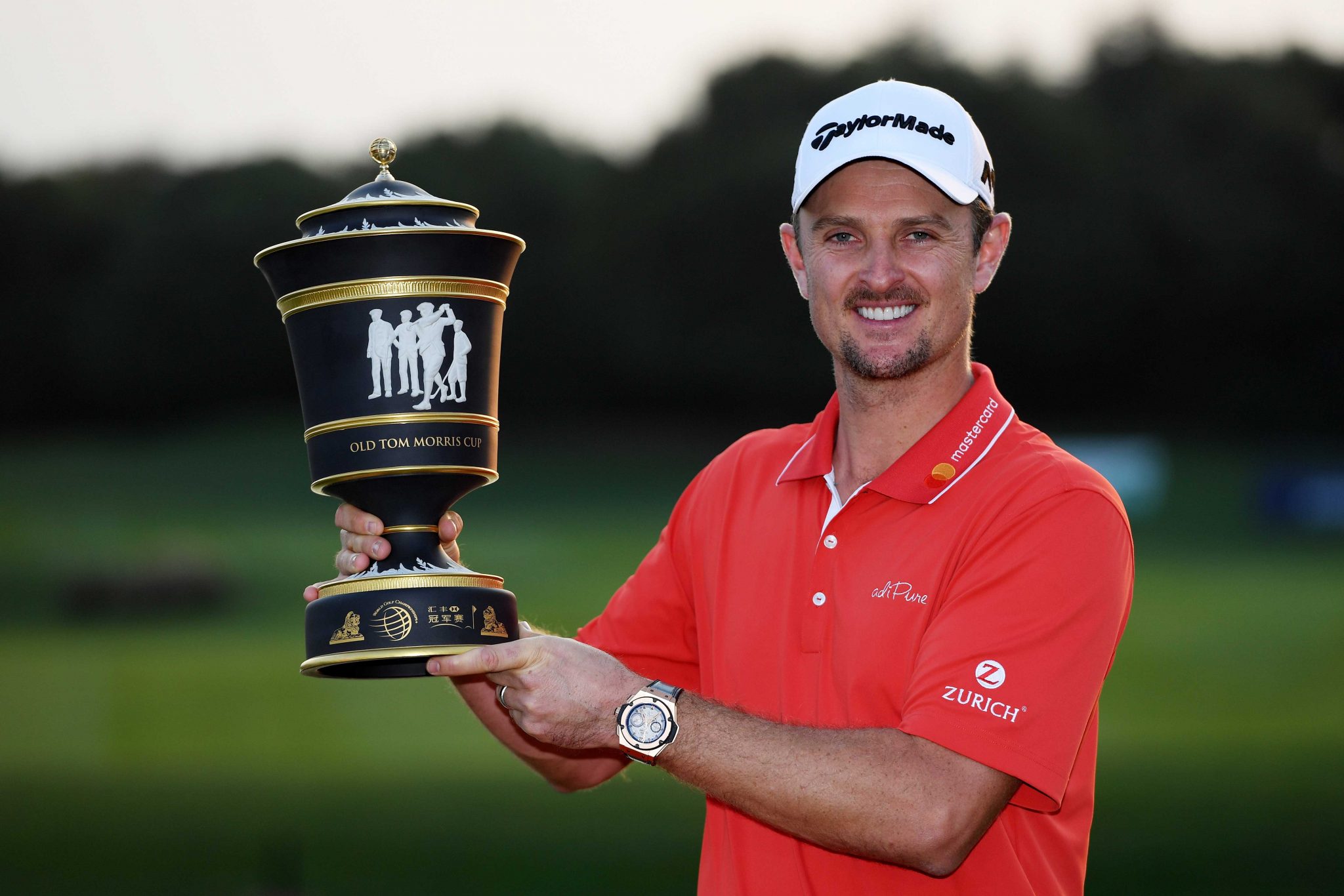 “Justin Rose is a class act in every sense. His commanding performance is symptomatic of the man, his natural and technical ability and his sense for the big occasions. This win, the same week as we launched Hublot’s newest addition, the Big Bang Unico Golf timepiece seems somewhat momentus. We are proud to have Justin as an Ambassador and beyond impressed with his performance this week.”

The week began in style for the Swiss watchmaker, Hublot as VIP’s and dignitaries gathered to witness the launch of the newest timepiece, the Big Bang Unico Golf in Shanghai, overlooking the iconic Bund. The congregation were treated to the first glimpse of the watch, specially crafted for the golf enthusiast.

“This has been a huge week for me and my team. Anytime you come out ontop with such a strong field is a great feeling and the product of a lot of hard work. It has been an important week for my friends from Hublot with the introduction of the Big Bang Unico Golf. It is certainly going to be a big hit with golfers around the world and a great addition to the company’s line up.”

The Big Bang Unico Golf is dedicated to the ultimate precision sport – golf. Hublot has designed, developed, manufactured and assembled a module to equip its new UNICO movement, which has been specifically created for golf. The MHUB1580 movement allows golfers to seamlessly calculate their score whilst on course. Hublot’s mechanical golf watch features aperture displays and is ultra-lightweight, providing true sports performance. 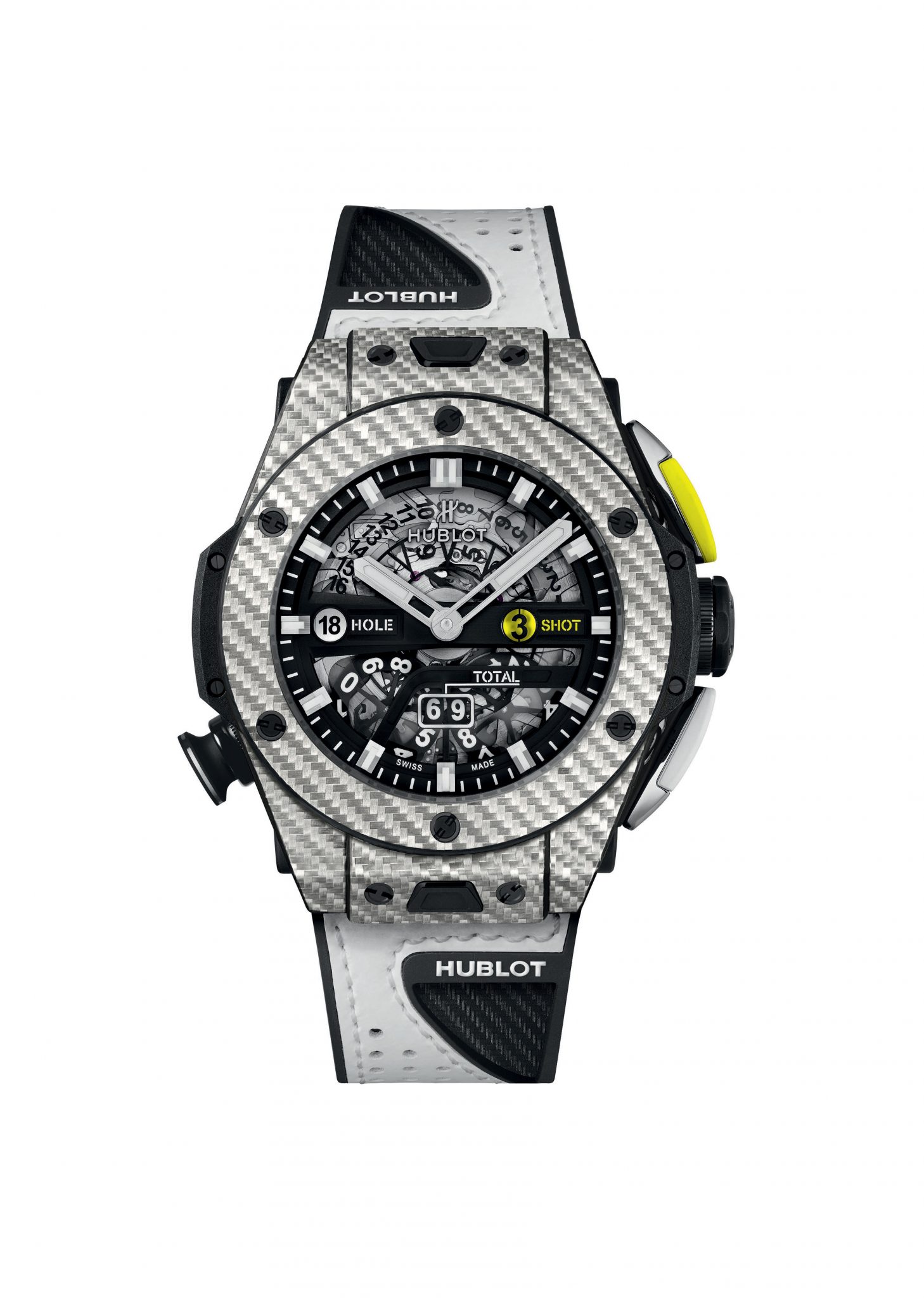 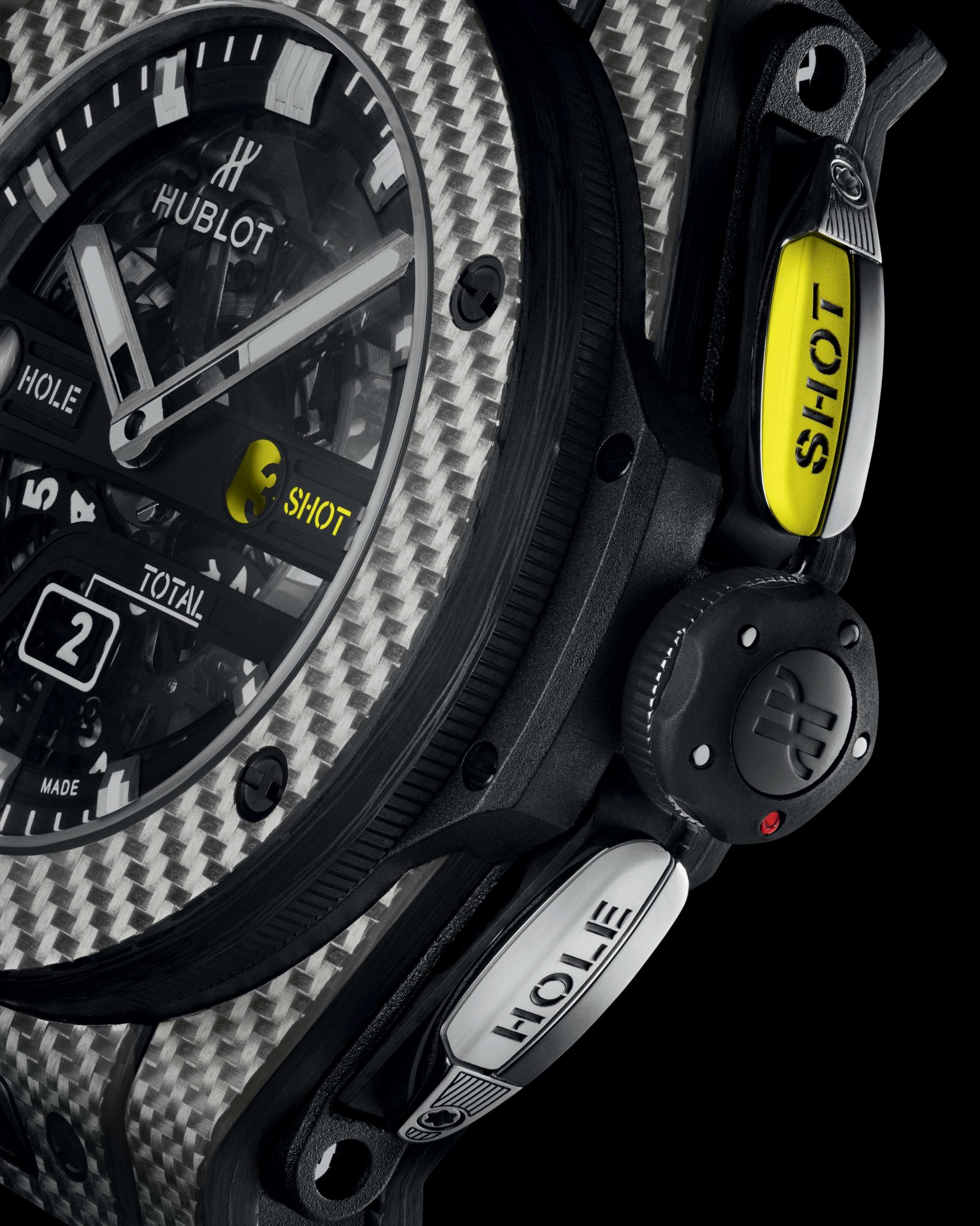 About the Big Bang Unico Golf

The case of the Big Bang Unico Golf is carved from Texalium®, an innovative material exclusive to Hublot, that is an amalgamation of carbon fiber and aluminum. This unique composite gives the watch its lightness; it weights precisely 97.93 grams!

The Big Bang Unico Golf has the look of a chronograph and has been conceived as a chronograph. Its movement features return-to-zero heart piece cams that ensure the counting mechanism is robust and reliable. The putter-shaped pusher at 2 o’clock activates the mechanism for displaying the number of strokes taken and counts the strokes per hole. The pusher at 4 o’clock allows the wearer to move on to the next hole by resetting the stroke counter to zero. The counter at 6 o’clock displays the total number of strokes played and is simultaneously updated. The pusher at 8 o’clock is shaped like a tee. This resets the mechanism and sets the counters to zero at the end of the round. During the round, this button can be locked by rotating it by 45°, thus ensuring that it is not inadvertently activated. The MHUB1580 full-skeleton movement allows the wearer to admire and understand how the timepiece works. The watch comes with two interchangeable wristbands fitted with the One Click system. One is made of white leather sewn on rubber and designed like a golf glove, while the other is made of technical fabric with a Velcro fastener to ensure the watch sits perfectly on the wrist.