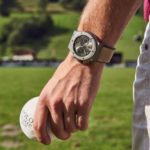 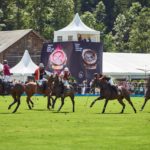 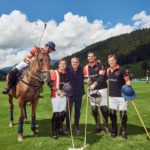 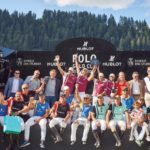 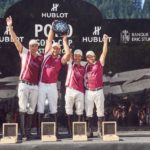 120 horses on the field, the equivalent of up to 963 under the Ferrari bonnet (LaFerrari) and 253 powering the Techframe Ferrari 70 Years Tourbillon Chronograph… driving a hunger for speed and accuracy.

“A fusion of power, speed, accuracy and elegance, polo, Ferrari, Gstaad, and Hublot find a natural fellowship on the field. Partners turned friends. When our friends celebrate an anniversary, we naturally want to celebrate with them. The Hublot Polo Gold Cup Gstaad emerged as an ideal event to host one of the tributes planned this year in celebration of the 70th anniversary of Ferrari’s own legendary prancing horse. Our partnerships offer opportunities to surpass ourselves, to join forces in pursuit of ever greater excellence, creativity and innovation. The Classic Fusion Chronograph Chukker and the Techframe Ferrari 70 years Tourbillon Chronograph are the ultimate embodiment of this.”

From the 17th to the 20th August 2017, Gstaad and the surrounding fields of its airport were transformed into Argentinian-style pampas. 6000 spectators felt the ground shake as 16 of the top Polo players on the circuit took to the fields creating a blur of hooves and mallets, all sporting the colours of the Hublot Polo Gold Cup. For the 9th consecutive year, Hublot’s hosts were taken on an immersive journey through the legendary world of its collaboration with the prancing horse brand, which this year celebrates its 70th anniversary…

The tournament – a category 6 on the circuit – is one of the most prestigious in Europe. For the first time, it hosted four teams with a total handicap of 14 – the highest level ever played on Swiss soil.

After the qualifying round on Thursday 17th August and the semi-finals on Saturday 19th August, “Banque Eric Sturdza” beat “Riva” to secure overall victory.

As the tournament’s Official Timekeeper, Hublot and its Classic Fusion Chronograph Chukker – a bi-compax chronograph – counted the 7.5 minutes of each of the 24 chukkers played during the competition1. A watch designed for polo in microblasted titanium dressed in the colours of the sport of kings.

In the Hublot x Ferrari pop-up store, all eyes were on the new Techframe Ferrari 70 Years Tourbillon Chronograph. Designed by Ferrari; produced by Hublot. Conceived like a sports car, its design was based on the HUB6311 movement, a new Hublot manufacture calibre featuring a chronograph tourbillon, 253 components and a 115-hour power reserve, with an ultra-high-performance case/chassis built on a lattice structure never before seen in watchmaking. Three elements – the skeleton case middle, container and case-back – made from Hublot King Gold, titanium, or a brand new strong, hypoallergenic material, PEEK (Polyether Ether Ketone) carbon.

A partner to some of the most prestigious polo clubs and tournaments on the circuit, Hublot is a major player in the sport of kings.