On June 10th, the Soccer Aid for Unicef match took place in Manchester. Hublot was both the Official Timekeeper for this charity event, and the partner of one of the two teams battling it out, the World XI team captained by brand ambassador, Usain Bolt. 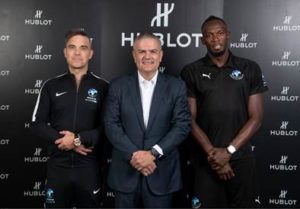 Back in February, sprinting legend Usain Bolt surprised the more than 5 million fans following him on social media by announcing his transition to the world of football, fulfilling his childhood dream of becoming a footballer. After his first appearance on the pitch during a “friendly” match organized by Hublot, which took place alongside the Baselworld 2018 watch fair, and which saw Diego Maradona and José Mourinho’s teams battle it out, he captained the World XI team during the Soccer Aid World XI match, taking on the England team. This clash of the titans was held in the iconic Old Trafford stadium in Manchester, just four days before the 2018 FIFA World Cup™ kicks off in Russia.

“Since 2006, Unicef has been able to provide help to many children in need thanks to these football matches. During this match, Hublot had the privilege of contributing to this honorable initiative in its role as both Official Timekeeper and supporter of the team captained by its ambassador, Usain Bolt. A formidable way to mark the impending start of the 2018 FIFA World Cup™!”

The match was organized under the Unicef banner to raise money to help children at risk across the world. A total of over £24 million had already been raised through ticket sales and donations before this latest match even started. This incredible sum is the combined total from the previous Unicef Soccer Aid matches, which have now been taking place for twelve years. At the 2016 event, the England team beat the World XI with a score of 3-2. 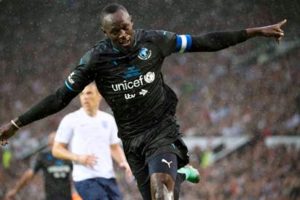 Facing them will be Usain Bolt’s team, which features former professional footballers and celebrities such as the chef Gordon Ramsay. Together, they represent the rest of the world. A long-standing Hublot ambassador, the Lightning Bolt was able to count on support from the Nyon manufacture when forming his team for this latest challenge. Their opponents were Robbie Williams’ England team. A Unicef UK ambassador and friend of the Swiss watch brand, the singer was responsible for co-founding and launching the Soccer Aid initiative in 2006. He was surrounded during this match by an all-star team, including four-time Olympic champion Sir Mo Farah. At the end of a thrilling clash, the England team managed to claim victory with a score of 4-3.

“As a child, I dreamt of becoming a professional football player, and playing with the Manchester United team. Today, being captain of a football team, on this iconic field with Hublot, and to play for such a good cause, helping children in need: it’s has been a great experience!”

“I co-founded Soccer Aid in 2006, and since then we’ve helped to raise over £24m for children in danger around the world. We hope to raise even more this year with the help of the public, sponsors and the UK Government (who is matching donations pound-for-pound), so that we can further help this fantastic cause”.

In addition to its support for Usain Bolt’s team, the Hublot manufacture also acted as the official timekeeper for the match, providing the fourth official’s board, and reinforcing its links with the beautiful game. This association already dates back 12 years, when the Nyon manufacture started to sponsor the Swiss national team. Since then, Hublot has become the “FIFA Official Watch”, and will be acting as Official Timekeeper for the FIFA World Cup™ for the third time, when the competition starts in Russia.

A few days before the whistle blows to mark the start of the 2018 FIFA World Cup™ , Hublot took to the pitch once more in support of a fantastic cause, participating in a match which is sure to become part of footballing history. Hublot and football: from strength to strength!