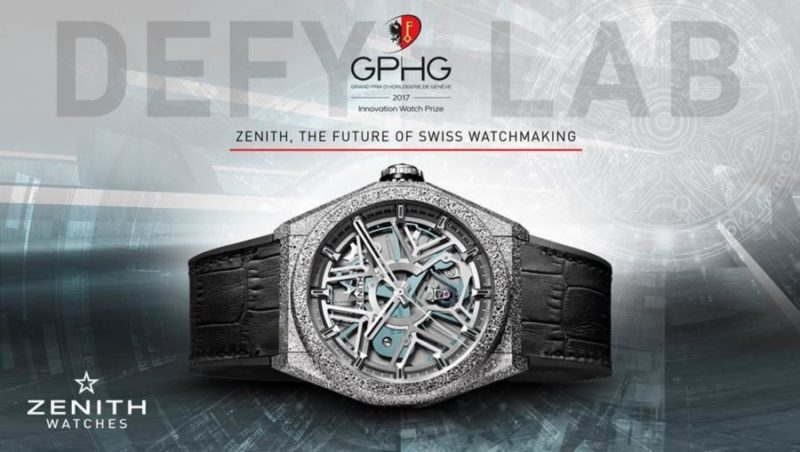 On November 8th, 2017 in Geneva, in front of an audience composed of leading personalities and representatives of the Swiss watch industry, the 2017 Grand Prix d’Horlogerie de Genève unveiled its prize list, including the Innovation Watch Prize awarded to Zenith for its Defy Lab.  A fitting reward for the world’s most accurate watch, with which Zenith is writing its future as well as that of the entire Swiss watch industry.

“I congratulate the Zenith teams as well as the R&D Institute of the LVMH Watches Division. Through this synergy of competencies devoted to serving Zenith, they have demonstrated and confirmed that Zenith now represents the future of the traditional watchmaking art.”  declared

“We are truly proud to receive this prize, which we see as the most important of them all. Here at Zenith, we are determined to instil a genuine start-up spirit and to reconnect the brand with innovation, the driving force for growth since our founding 152 years ago. It is a real reward and a token of recognition for the work accomplished by our entire staff! Once again, a big thank you to the jury of the Grand Prix d’Horlogerie de Genève and to all my teams.”

Defy Lab in a Nutshell

Boldly defying the sprung balance regulating-organ principle that has prevailed since 1675, and instead calling on cutting-edge technologies based on the latest research in horology and in the science of materials, the aptly named Defy Lab represents a major watchmaking breakthrough. Its new monolithic oscillator in monocrystalline silicon, coated with a silicon oxide layer, replaces the 30 or so components of a conventional regulating organ – and in doing so does away with all the stages normally required for the latter, such as assembly, adjustment, setting, testing and lubrication. Beating at the incredible frequency of 15Hz and boasting a generous 60 hours of autonomy, this revolutionary movement achieves a mean daily precision of 0.3 seconds, a degree of performance that it maintains for 95% of its power reserve. Insensitive to gravity and dispensing with any need for lubricants, the Defy Lab is triple certified: for its precision duly recognised by the Chronometer title awarded by Besançon Observatory; for its exceptional insensitivity to temperature changes far exceeding the ISO-3159 standard; as well as for its outstanding resistance to magnetic fields up to 1,100 Gauss, which is 18 times better than the ISO-764 standard. And to attire this distillation of innovation and technology, Zenith has chosen the world’s lightest aluminium composite, Aeronith.