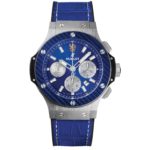 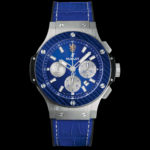 London, 2nd November 2017 – Swiss watchmaker Hublot and Premier League champion Chelsea FC have teamed up today to celebrate the second chapter of their incredible story. Always blue, but now in a Big Bang! After the successful launch of the Classic Fusion Chronograph Chelsea FC in 2016, the Big Bang Chelsea FC has been revealed today at the home of “The Blues”’, Stamford Bridge.

Chelsea Football Club is one of the world’s most iconic football clubs. The current Premier League champions, Chelsea were UEFA Champions League winners in 2012, following that success by lifting the UEFA Europa League trophy in 2013. Founded in 1905, Chelsea is London’s most central football club, based at the iconic 42,000-capacity Stamford Bridge Stadium.

VIP guests made their way inside Stamford Bridge and took their seats behind the home dug outs. From the pitch side, Michel Pont, Master of Ceremony, welcomed guests underlying the close ties existing between Hublot and Chelsea FC since August 2015. Both the iconic Swiss watch company and the globally recognized football club are associated with quality, tradition and the pursuit of excellence in everything they do. Hublot now has a strong presence inside Stamford Bridge grounds, on LED score display screens and pitch-side banners, and through clocks displayed in key areas around the site.

Welcomed by a round of applause, Chelsea FC star players Alvaro Morata, David Luiz, Danny Drinkwater and Cesc Fàbregas made an entrance on the pitch with their home jerseys. Carrying a special Hublot and Chelsea FC ball, each player dribbled the ball pitch side before they made their way to the center of the field where a special Hublot and Chelsea FC plunger had been installed, walking at the sound of a 20-second countdown, repeated at unison by all guests. Reaching zero, Chelsea FC players activated the plunger, thus giving the go-ahead for the reveal of the new Big Bang Chelsea FC Limited Edition: on a 12-meter high banner, its image came down from the London sky in the blink of an eye.

The Big Bang Chelsea FC is the second watch created by Hublot in partnership with Chelsea FC and a tribute to “The Blues”, the Chelsea FC players. Limited to 200 pieces, it features a 44mm stainless steel case and a bezel made of carbon fiber and blue Texalium. Its blue sunray dial includes three counters at 3, 6 and 9 o’clock, the latter being proudly engraved with “SW6”, Fulham postcode where Stamford Bridge is located. Powered by a self-winding chronograph, the Big Bang Chelsea FC has a 42-hour power reserve. The Chelsea lion logo is situated both at 12 o’clock and on the case back crystal. To put the final touches to this all blue look, the strap comes in rubber and blue alligator with a stainless steel deployant buckle clasp.

Alongside Chelsea FC players, the attendees experienced playing a short table soccer tournament pitch side. The winning team was awarded two hospitality tickets to attend a Chelsea FC home game of the 2017/2018 season. To close this incredible time, guests enjoyed tasting a “SW6” cake created for the occasion and could take some pictures with their favorite Chelsea FC players.

Ricardo Guadalupe, CEO of Hublot, said: “Today at Stamford Bridge, we demonstrated that our partnership with Chelsea FC is stronger than ever. The Hublot Big Bang Chelsea FC reminds us of the great history of the Club, highlighted by Hublot’s audacious design and refined mechanics. We wish Chelsea FC all the best for the 17/18 Premier League season and the UEFATM Champions League. Hublot loves football!’

Chris Townsend OBE, Commercial Director of Chelsea FC, added: ‘We are delighted to be unveiling our second Chelsea watch design with Hublot, here at Stamford Bridge in the heart of London. The design is exquisite and, like our partnership, we are very proud of this collaboration. Hublot continues to lead the way in their industry and are a valued partner for Chelsea FC. We are extremely grateful for their support and vision.’

With the launch of this new timepiece, Hublot once again strengthens its deep connections with the world of football. Hublot was the first luxury brand to invest in football in 2006, and has a close cooperation with FIFA as Official Timekeeper, a partnership which includes presence at both the Confederations Cup and iconic World Cup tournaments. Hublot is also closely linked with UEFATM since 2008, and with some of the most prestigious clubs in the world such as Juventus FC, Sport Lisboa e Benfica and of course Chelsea FC.