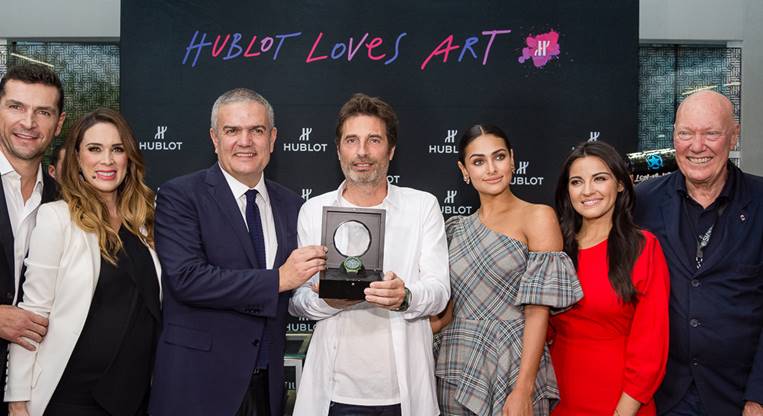 “It’s an honor for Hublot, as we love Mexico so much, to share with friends the work of Richard Orlinski. An artist whose bestiary of sculptures already features the emblems marking the power of the Mexican flag—the snake and the eagle. Is this chance or fate?”

“I’m delighted to have designed the new Classic Fusion Orlinski Mexico with the Hublot teams. For me, this colorful land was a real source of inspiration and made me want to create a collection of sculptures celebrating Mexico.”

Richard Orlinski, one of the world’s bestselling contemporary artists is known for his love of color. His famous sculptures display a bright and eclectic color chart. For the first time Orlinski decided to use green, this time in the creation of the new Classic Fusion Aerofusion Chronograph Orlinski México. The Hublot Classic Fusion Aerofusion Chronograph has a distinctive and original style, marked by bevelled look with edges and facets that capture the light. The timepiece now confirms its original design in vivid green. 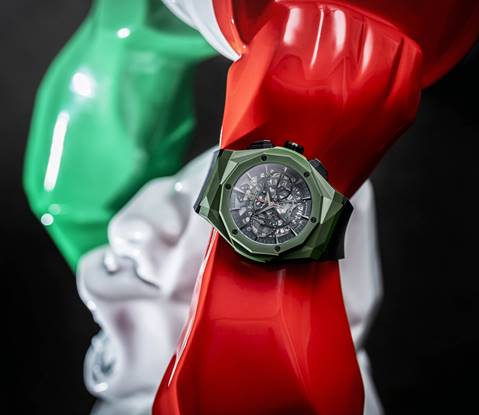 GOING GREEN IS ON TREND

Capturing the trend of ‘going green’ the Hublot Classic Fusion Aerofusion Chronograph Orlinski México is available in only 30 pieces incorporating the colors of the Mexican flag.  A key feature of the watch is the case with 12 facets in green ceramic, created by Orlinski using a three-dimensional cambering technique. The Mexican flag heavily inspires the watch – the green case symbolises hope and independence, the red second hand on the dial evokes the union and the HUB1155 skeleton self-winding chronograph movement bears the eagle and snake featured on the Mexican flag and interpreted by Orlinski who has previously featured these creatures in his bestiary. In addition, a new sculpture featuring and eagle and snake by Orlinski will be revealed at the SIAR Mexico show, with a silhouette of this creation included as a decoration on the watch. The two animals embody ‘Earth’ and ‘Heaven’ and remind us that: “while struggle is a necessary stage in existence to become aware of the reality of the world, it cannot be the goal that lies in the union between beings and, above all, between a being and themself.” The Hublot Classic Fusion Aerofusion Chronograph Orlinski Mexico has been designed as a piece of art to be worn on the wrist.

The SIAR Mexico show marks the moment when Richard Orlinski brings his graphic universe to the very heart of Mexico. Richard Orlinski, one of the world’s most renowned contemporary artists is part of the Hublot family alongside Maxime Büchi, Lapo Elkann, Pelé, Lang Lang, Bar Refaeli, Usain Bolt and Dustin Johnson.